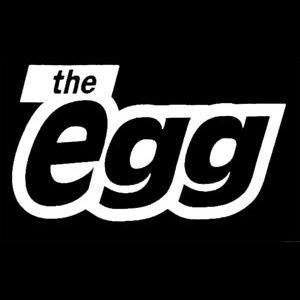 Holotronica is the company behind Hologauze®. The most transparent and reflective screen on the market.
Following two amazing streamed shows from our studio in Bristol with The Orb, we are now curating a series of live streamed events featuring audio visual artists performing using Hologauze®. In June we brought you the live coding modular AV wizard: Chromatouch. (watch again here: https://www.holotronica.com/holotronica-live/ )
Next up in our series of live streamed events, we are delighted to announce: The Egg!
Founded in the early 1990s in Oxford, England, the Egg released their first EP Shopping (1995) on the independent record label, Cup of Tea Records. Having been signed by China Records, in 1996 the band released the album Albumen in the United States on Discovery Records in 1997. In 1998, the follow-up album, Travelator, was released, produced by Tim Holmes of Death in Vegas. In 2000, the group also recorded the theme tune to the ITV series, At Home with the Braithwaites!
Following Travelator, the Egg began exploring the new directions. Following their Mellowmania EP in 2002, they were signed by Bar de Lune Records, a subsidiary of Beechwood Music. Beechwood folded the following year just before a return with their new album, Forwards, (produced by Benji Vaughan) and subsequently released on Squarepeg Records in 2004.
The single “Walking Away” (featuring Sophie Barker of Zero 7) was released in 2005, and further remixes commissioned by licensees. This became a crossover hit, and spawned the bootleg by David Guetta, “Love Don’t Let Me Go (Walking Away)”, to reach #3 in the UK Singles Chart in August 2006.
The Egg are Maff and Ned Scott and they have promised us a live AV show (with special guests) that will delight fans and show off synched video content presented on our Hologauze® screen.
To see the show live, please visit our YouTube Live channel here: http://www.YouTube.com/channel/UCYV0-TJNoXE911hbEdOvvDw/live
Date: Thursday 5th August
Time: 20:00 (BST)
Holotronica YouTube channel: https://www.youtube.com/channel/UCYV0-TJNoXE911hbEdOvvDw
Instagram: https://www.instagram.com/holotronica/
Twitter: https://twitter.com/holotronica
Website: https://www.holotronica.com/
*Finally, if you are an audio visual artist who would like to be considered for a future live streamed show and perform your content on Hologauze® in Bristol, please get in touch with some info and links via our socials
bryony-holotronica2021-08-16T11:25:42+00:00